If you were to ask me a few years ago to tell you what a prophet is, to define what the prophet’s task is, I would most likely have told you that a prophet is one who predicts the future. After all, we usually hear readings from the prophets around Christmas or Easter when their prophecies are read in the context of the birth of Christ or of his suffering and death. We think of Isaiah prophesying that, “a woman shall conceive and bear a son” (c.f., Is. 7:14), or, “he was pierced for our sins, bruised for our iniquity. He bore the punishment that makes us whole, by his wounds we were healed” (c.f., Is. 53:5).

But really, the prophet has the task of helping to open the eyes of the people to the divine view of their life, which, more often than not, is a view different than what they are typically convinced is “right” (1). And because the prophets challenge the views that people hold to be “right,” views which they hold very tightly, they are not often the most popular people in town. And yet, the prophets are compelled to keep speaking; they cannot keep silent. When the Spirit of the Lord enters into them and sends them out (c.f., Ez. 2:2), they have a pressing need to speak. They feel fiercely, cannot silence their conscience, cannot trivialize the matter at hand, and so they go out to the people to proclaim the divine view, knowing that they will most likely not be treated well or liked by those who hear them (2).

Now, here’s the real challenge: at our baptism, at each of our baptisms, we were anointed with chrism oil, and by that anointing were filled with the Spirit, anointed as prophets, and given the same mission: to help open the eyes of the people to the divine view of their life. But the challenge comes from the fact that we ourselves are not always familiar with Christ, and so it’s hard to proclaim that view, or better yet, perhaps we’re a little too familiar with who we think Christ is supposed to be.

Think back at our Gospel for today. Jesus has returned home to Nazareth and is teaching in the synagogue on the sabbath. The disciples were with him, and in their conversations were probably telling people about the amazing things they had seen happen in the presence of this man. And the people from Nazareth who hear him are astonished, amazed at what they were hearing. And they started to ask questions, “Where did he get all of this? Where does this wisdom come from? Isn’t this Mary’s kid, Jesus? Didn’t we watch him grow up here? He didn’t go to some prestigious school, he just worked as a craftsman with his father. Who is this guy?” And just like that, their astonishment turns to offense, to shock, to scandal. After all, Jesus is just an ordinary guy, just another native of Nazareth. And they probably start saying things like, “Who is this guy to be teaching us, to be doing such extraordinary things? Nah, I knew him when he was a kid and there can’t be anything special about him.”

I think this is often where we find ourselves. At least, I know that’s where I was at for a long time. I thought being a Catholic and going to mass and doing all of the “Catholic stuff” was just something I had to do to keep myself from going to hell. Honestly, I thought that Jesus came to teach us the new and improved morality which would finally keep us out of hell. I thought that Jesus came two-thousand years ago, left us with some teaching we had to believe and follow, and then died and rose again so he could open the pearly gates; and now he’s just waiting up in heaven to judge us on how well we did. But, my dear brothers and sisters, that’s just absurd! When this is what we think the “good news” of Jesus Christ is, when this is how we experience the “Gospel”—we’ve missed it.

Oftentimes we are unaffected by what we hear at mass, by the prayers we hear at mass, by what the mass truly is, because we’ve grown up with it, and it is just too familiar to us, too ordinary. And when this is the case, then it’s easy to put ourselves in the shoes of the people of Nazareth in today’s Gospel and say things like, “I’ve heard all of this before, and it doesn’t make much sense. I grew up as a Catholic, and I just never understood it. I still come to mass, but only because I have to.” Jesus just becomes that ordinary guy we grew up with, and we begin to think, “There’s no way he’s anything special.” It’s at that point that it becomes easy to want to forge our own path, to just go at it alone. We’re sort of resolved that this image of Jesus that we have must be true, it must be it.

But this is why, my dear brothers and sisters—this is why we are in need of constant renewal, why we constantly must return to the beginning! Day after day, Sunday after Sunday, each and every morning (3)—we are in need of a renewal and a return to the action of Jesus Christ, to experience his presence with us here and now. It is very tempting to believe that Jesus was only around two-thousand years ago, or that he is somehow only magically present in the Eucharist. But Jesus Christ is not just a thing of the past, and the Christian life is not just a bunch of teachings we have to believe and follow, or else! No, Jesus Christ is present here and now, he is acting powerfully in our lives here and now through his Spirit! And it is this fact that we must be open to before all others. Do you believe that Jesus is active here and now, or do you just believe that God has no ability to work in your life, that Jesus could not possibly be anything special?

A true familiarity with Christ can only happen by allowing him to encounter us here and now. It can only take place when we make the slightest bit of room in our heart for him, allowing him a chance to enter in and be present to us. It’s a scary thing, waking up each day with this type of openness to the action of God, and it’s scary precisely because it’s not predictable. But that is step one of being a prophet. We were called to be prophets at baptism, but in order to be prophets, we have to first allow the Spirit into our lives; we have to allow who Jesus truly is to challenge us; allow ourselves to be astonished and amazed by all the good he has done for us (c.f., Ps. 116:12); and embrace that it will take a daily renewal of this recognition to sustain us. Thank God for this gift of the Eucharist, in which his sacrificial death and resurrection is made present; in which we are able to be present at the cross and the empty tomb. Thank God who is always faithful to us, never fails us, and never gives up on us. 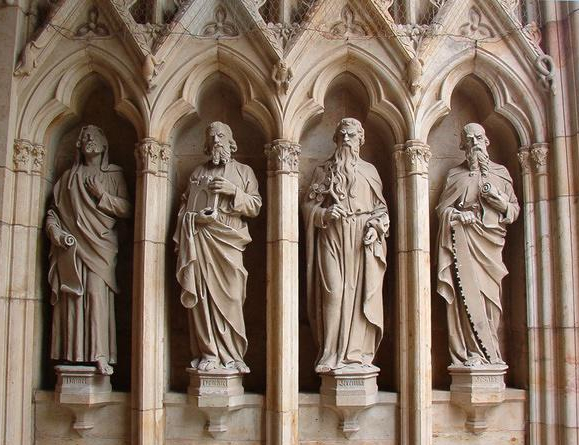